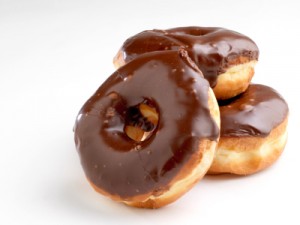 I passed a doughnut shop the other day and was struck by how much impact something that doesn’t even exist can have on something as simple as a pastry. I’m talking about ‘doughnut holes.’ Think about it. The classic doughnut, not the Bear’s Claw or other pastry, is defined by the hole. We recognize it more by the thing that’s missing than by the obvious confection itself! To separate a doughnut from its hole is impossible. It changes the nature of the doughnut entirely. It stops being a doughnut and becomes a pastry.

There are a lot of things in our lives that are defined by a mix of the tangible and the intangible. Like sales and marketing and business. It’s the indefinable, the hidden or often invisible to the naked eye aspects of all those things that help define them. The “white” or “negative” (empty) space in a photograph is often what makes a photo more powerful and memorable. Not the object in the photo, but the emptiness around it.

Sales is also a lot like a doughnut. It’s defined by what is not there, as well as by what is. I can teach the skills, the words, the principles of the sales trade, but it is that indefinable hole, the thing that’s missing in traditional sales manuals and talks, that makes it so effective that we can’t take it away, but we can’t quite put our finger on it.

Bob’s Daily Doughnut, or rather the doughnut hole, is that missing part that defines the doughnut. It might be a quote, some quick insight, and then the sweet, tangible take-away you can sink your teeth into. One is the hole, the other the confection. One is intangible, the other is tangible. You can’t separate them without changing the effectiveness. Together the hole and the cake make up, Bob’s Daily Doughnut. I know, it seems sort of silly, but it’s often the simplest, silliest things that teach us the most. And besides, I guarantee there are no calories in any of these tips. Eat all you want!

If you’re not already subscribed to The Water Cooler Hangout (now The Daily Doughnut) or don’t know if you are or not, why not take a few seconds and click on the “Want Free Stuff” subscribe button on the left of the screen. We start passing out doughnuts tomorrow!