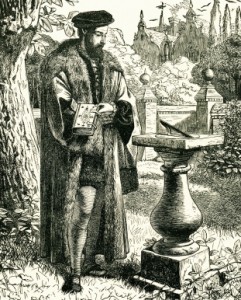 Galileo and Leonardo da Vinci were sitting in a bar. Galileo had downed a few Jaegermeister shots and he said, “Leo, I just don’t see why you’re wasting your time with that crazy flying machine stuff, those leaky viaduct designs, the crummy shots at sculpture. You’re a painter, man—stick to one thing, claim your ground. There are planets and there are moons—you don’t want to be a clump of little moons when you can be a planet.”

Leonardo licked the last of the foam from a craft-brew pint off his lips and said, “Gally, you’ve got stars in your eyes, and I like the way they shine. But no man is ever a fixed orbit. There’s no science and there’s no art—there is just the revolving sum of self, the pieces of which sing their own song.”

Galileo drew back his head, regarded da Vinci with a smirk, and said, “Bartender, line me up with three more Jaegers. If I have to listen to this crap, I might as well be pied-eyed as well as starry-eyed.”

OK, so maybe that conversation didn’t happen exactly as described. But if you’re a person selling services to customers, you might think those services must be constrained to a narrow niche, and that the selling of those services has to be done a certain way.  A small businessperson can feel some pressure to stick to selling pipe fittings and plumbing parts, because that’s what his dad did, no matter if selling design services for beautiful aquascape systems are what populate his dreams. As da Vinci ended up saying to Galileo, “Fug that noise.”

While I heartily admire the folks who have a laser focus on the services they sell—”I write whitepapers on telecommunications innovations for Android phones”—for some of us, that focus isn’t fulfilling. While a tight, defined space might mean a foreseeable flow of steady dough, for most of us, what’s in our spaces always means more than mere money. Me, I like my white papers with a bit more purple in them. Moo!

I started copywriting a zillion years ago for a marketing/advertising guy who turned out to be a flimflam man. Repossession agents literally came and took away a fancy typesetting machine (and the table it rested on) while I was working. I moved from that to writing catalog copy for an outdoor equipment retailer. It was only a small puddle-jump to writing notecard copy for an environmentalist photographer/publisher. I figured I would settle down to a specialty, and I did: everything.

Software manuals, radio ads, press releases, website content, white (and purple) papers, direct mail, brochures, magazine pieces—I’ll proofread the logo on your jeans if you’ll let me. Though I often see in copywriting-advice circles that monoculture copywriting is where a freelancer finds the most fertile fields, I found that it’s in the writing rainforest, with its curling vines, it trees high and low, its bright birds, where you find the most fun. You can even make a living too.

Indeed, if the violin and the violin alone is your instrument, play on. But if you then pick up a sax and find your inner Coltrane calling, strike up that band too. Moving the metaphor, consider this: Your painting might pick up right when your poetry is panting. Big project or little, make your choices carefully. But the choosing—and the freedom that affords—can be gratifying. And after all, painting the Mona Lisa doesn’t mean you can’t still be happy painting the porch.

The mind and pen of Tom Bentley can be found at http://www.tombentley.com/.

If you’d like to tell your story and appear in a Sunday edition of The Daily Doughnut simply drop me an email at bob at bobpoole dot com with a few paragraphs about your favorite sales tip, your greatest challenge, a story about a customer that made your week or changed your life, or anything about your business that you would like to share with other readers. Humor is encouraged!