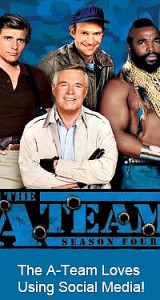 Hannibal Smith, the leader of the A-Team, would smile and say this line when his plan would – well, come together. The phrase is now quoted the world over and has endured for three decades. It came to mind today when I followed a discussion at a Facebook Group called Social Workers.

The discussion began 14 hours ago with a clinical social worker posting he’d like to start a private practice. He asked for suggestions for getting accredited for 3rd party payment as he had run into a wall with the first insurance company he contacted.

About a half-dozen comments and 12 hours later, another Licensed Clinical Social Worker told the original poster that he has been in his shoes. Then he told him his firm is looking to expand their practice and asked him to give him a call or text him to discuss the possibility of helping each other out.

You may ask, “What plan came together?” From my perspective, the plan to use social media to establish relationships, network, and form tribes. I also thought it very appropriate that a Group called Social Workers would be using Social Media to do all that plus help tear down walls and fences that we’ve built between too many of us these past three decades.

Hannibal would have loved it. I know I did.