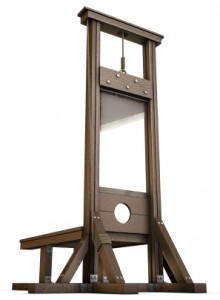 Do you sell in an industry that uses RFPs (Request for Proposals)? I once made the mistake of creating a company that sold a software system to very large organizations almost all of whom made use of the dreaded RFP even though it was not a requirement for them. After wasting hours of time on responding to RFPs with the hope we might get the sale only to see the sale go to the company that the customer wanted all along, I came to realize that RFPs are the biggest waste of time and money in the world of sales.

My belief was validated one evening when after a number of cocktails the decision maker for one of these large organizations became loquacious at a hospitality party I was hosting during a national convention and confided that the only reason his organization uses RFPs is to “show the big bosses we have done our due diligence.” He went on to tell me that most of the time the specification in the RFPs are written by the software supplier the organization already has chosen. By the time the evening was over I knew I didn’t ever want to sell anything again if it involved having to respond to an RFP.

In his new book, “We Are All Weird,” Seth Godin makes a statement that resonated with me and brought back my memories of selling to these types of companies. He says,

“Either you’ll want to spend your time and effort betting on the mass and the status quo – and trying to earn your spot in this crowded mob – or you’ll abandon that quest and realize that there are better opportunities and more growth if you market to and lead the weird.”

Part of Seth’s definition of weird is “people who have chosen to avoid conforming to the masses, at least in some part of their lives.”

If any of those large organizations had chosen to purchase their software system without the use of an RFP, they would have been considered to be weird and I would have enjoyed selling to them.

But that didn’t happen. Instead I chose to be weird and I concentrated my efforts on entities that used their collective minds and hearts to engage in honest and open discussions of software systems and not waste 80% of my time trying to fit into someone’s idea of a system designed to serve everyone and therefore one that would never satisfy anyone.

So I say “Death to RFPs. Off with their heads.” And, if you’re still working in an industry that uses RFPs exclusively or even extensively, I offer a suggestion. Search for the weird and sell to them instead.