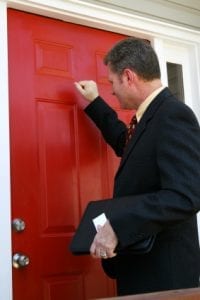 The doorbell rang around 10 o'clock this morning. I wasn't expecting anyone so I was surprised to see a young man wearing a tie and dressed for success.

I opened the door and he said hello and immediately told me his name is Ryan and the name of his company. I was gobsmacked as my friend Tim might say. Not only because he was engaging in cold calling by knocking on doors but because of what he was selling.

He was trying to sell investment services door to door!

Ryan's company is a nationally branded, full-service, financial investment firm. I checked them out on the web after he left. He was very polite and tried to establish some kind of rapport in the first 15 seconds by asking me questions about myself and mentioning he grew up in the area. Then he pulled out a flier, pointed to 4 types of services and asked me which ones I'm concerned with today. As you might guess, the interview didn't last too long.

It was obvious that he is new to sales and is probably in some kind of training program. I hope he didn't pay for his training because whoever told him to go door-knock to sell financial services is doing the young man a great disservice. There are at least a dozen other things he could and should be doing instead of cold calling. And, since his rate of rejection is going to be sky-high using this technique he might give up and think he's not cut out to do this job.

That's not the case. In the few minutes I spent with Ryan, I was impressed with the young man. I also saw myself 35 years ago being taught how to do the same style of sales. However, in 1995 Amazon was created and e-commerce took off. People now have all the choices in the world of what they buy and from whom they buy. And they don't choose their financial advisers from strangers who knock at their doors.

What worked 15, 25 and 35 years ago in sales does not work anymore. I heard Ryan go to a neighbor's house and begin the exact same pitch when they came to the door. I ran upstairs to my office and grabbed a copy of Listen First – Sell Later. When I came outside to look for him I heard him three doors away. I waited while he finished his spiel and the door was closed and then I called to him and gave him the book.

You can give a copy to anyone you know who could use some help in sales. It's free to download. It might save someone you know from all that cold calling rejection.