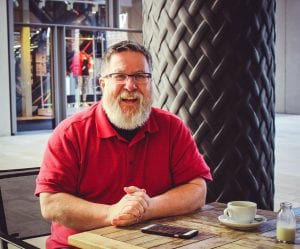 “When you discover what you don’t know when you think you know a lot, it’s a bit of a comeuppance”  –Steve Dotto

Welcome to the Watercooler Hangout podcast, where I chat with influential and successful sales and marketing gurus as we share real-life stories about sales, marketing, leadership, creativity, and current events. Listen in and learn the best advice on how to move your business to the next level!

Today I’m here with Steve Dotto, who hosted a syndicated Canadian tech show which taught people how to use tech. For two decades, Steve hosted the show and decided, since he hosted the longest-running show in Canada, that he must be Canada’s Favorite Geek.

He started out at Apple, edutaining consumers with his desktop publishing knowledge. A TV producer looking to do a series on tech talk found Steve through this venue and hired him to host a show called Dotto on Data, the purpose of teaching teachers how to use computers pre-web.

“The writing was on the wall,” Steve comments, looking back at the last few years of his career in TV. His new higher-ups at the television station switched his format to pay to produce the show. “That broke me in a lot of ways.” He lost his Canadian media classification. As a result, he couldn’t get paid to be on the air. “They also broke my heart” because they only saw him as a revenue source after a 20-year relationship with the broadcasting company.

How Steve’s Mentor Showed Him How to Be an Influencer

Mari Smith, a premier Facebook marketer, met Steve at a conference several years ago. She lived in Canada and knew Steve from his television show. I can still remember her talking to me about what I was doing in business, and she says to me, ‘You’re doing it all wrong!” She took Steve under her wing and schooled Steve about how to run an online business and how to create an influencer platform for the next six months.

Listen in as we talk about how Steve discovered Webinars, his turnaround point in his business, and how he has pivoted his business since COVID. Also, Steve and Bob announce they are writing a book together called “No Limit Over 50” to be published in the next few months.

Visit me on the web
Connect with me on LinkedIn
Join Listen First Sell Later on Facebook
Get Your Free Copy of Listen First – Sell Later and member discounts
Steve Dotto on the web
Listen in to Steve’s podcast
Checkout Steve’s Wednesday Webinar series
Join the Grey Wave today!

Spread the word about The Watercooler Hangout Podcast and share this episode with a friend!

2 thoughts on “Steve Dotto and The Grey Wave”