I very rarely go to a mall. Truth is I rarely go shopping unless it is online. But every once in a while when I’m out of town on business I’ll find myself at a mall. One time I found myself wandering the nearly deserted attached Tysons Galleria when I got stuck in the Ritz Carlton in Tysons Corner, VA in an ice storm for two days. I had such a good time shopping that American Express called to see if my card had been stolen because of all the “different to me” purchases.

This story is about a different time spent in a mall. I was traveling in the Palm Beach Gardens area of Florida and I was looking to kill some time while waiting on a friend so I stopped into what turned out to be a very upscale mall. My plan was to people watch.

That’s where I met her – The Best Customer She Never Knew.

I was looking at watches in what would be best described as an independent, upscale, jewelry store. I actually don’t wear watches these days and I have a bunch already so I’m not a good prospect. But, I enjoy looking at them and this store had quite a few expensive ones.  A well-dressed woman who might even have been the owner approached me and asked what most salespeople ask, “Can I help you?” I responded the way most customers do by saying, “No thank you. I’m just looking.” I expected her to say something else to leave the door open to come back to me but she just wheeled on her high heels and went back to whatever she was doing before I came into the store. I think it was polishing something.

A few minutes later a woman came in and also approached the watch display case. She seemed to know what she was looking for so I moved aside to let her get a better look. At the same time we made eye contact and exchanged hellos. The salesperson who had to have seen her come in since she walked right by her to get to the watches continued polishing or whatever it was that was keeping her occupied. After a few minutes, the woman looked around and smiled at me again and said, “I guess nobody wants to make a sale today.” I laughed and said, “Yeah, I guess the jewelry business is just too good these days.”

Finally the woman walked back toward the salesperson and said, “Excuse me. Could I get some help here?”

The sales rep let out an audible sigh and slowly made her way toward the watch display case.

“I’d like to see that Breitling right there,” she said pointing to a beautiful man’s timepiece.

I don’t know much about high-end watches but I know Breitling is one of them and I know they are expensive – like thousands of dollars expensive. I also knew that my people watching was about to get more interesting.

You see the woman was dressed in faded jeans and a blouse and she had a look of being a bit disheveled. She was carrying a handbag that was made of distressed leather. But, it appeared to me that her most pertinent feature (from the disdain the salesperson showed) was her skin color. It wasn’t white. And, that fact plus her way of dressing had already made up the sales rep’s mind that the customer was, at the very best, wasting her time.

She sighed again as she got the watch out of the case and held it tight in her fingers as she showed it to her. I was pretty sure the woman w 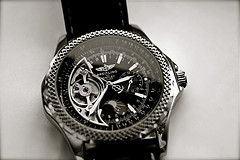 ould want to hold it if she was going to spend that kind of money on what must be a gift.  I was also pretty sure the salesperson wasn’t too keen on letting her touch it. She reached for it and finally the rep let her hold it. “It’s a beautiful watch,” she said admiringly.

She looked it over and even put it on her wrist. Since it was a man’s watch it was much too big for her but you could see she was imagining it on someone else’s wrist. She had a large smile on her face and I knew she liked it. I waited to hear the big question.

“How much is it?” she asked as she took it off her wrist. The rep took the watch and put it back into the display case and locked the door. She then looked up at her and with condescension dripping from her lips and another sigh, she said, “$7,250.” She then put her hands on her hips and stared at the woman with a look that said, “Will you now please leave.”

As her eyes narrowed, the customer started to open her mouth to say something. Instead she started laughing. At first it was more of a chortle and then it turned into a melodious giggle as she walked out the door shaking her head. I think the sales rep thought she was laughing at the price. I was positive she was really laughing at the clerk when what she really wanted to do was give her a piece of her mind.

I didn’t realize it but I started chuckling myself. The salesperson gave me a look as if to say, “Why don’t you join her and get out of my store.” And, so I left thinking about how poorly the clerk treated the lady. I didn’t know if she was a real prospect or not but I did know that the salesperson never bothered to find out and that she had judged her as not worthy of her time as soon as she saw her.

But, that’s not how this story ends.

I walked a few stores down the mall and decided to stop in and have a coffee at a cafe.  As luck would have it, our would-be customer was sitting at a table having her own cup. I got my coffee and sat at a table that faced her. I could see she recognized me so I smiled and said, “I enjoyed how you dealt with that rude clerk back there. You had me laughing with you.”

She put her cup down and said, “Well, I really wanted to tell her to bite me. But, I was afraid she might.” And, with that we both started laughing all over again.

Wiping the tears of laughter from her eyes my new friend said, “The watch is for my husband. It’s his birthday on Saturday and he loves watches. There is another store not too far away where I can buy it. I’m getting it to go with his car.”

She saw the look of puzzlement in my eyes and explained, “He drives a Bentley. The watch is a Breitling Bentley.”

And, with that revelation, I started laughing all over again!

3 thoughts on “The Best Customer She Never Knew”