This post turned out to be so long I have turned it into two-parts. Part-two will be available early Wednesday morning. Or, why not sign-upto get it in email?

You’d think with the economy as slow as it is right now that companies would be doing all they can to retain their customers. It is a fact that it is a lot more expensive to attract a new customer than it is to retain the ones you have.

But, it appears that once again that the Sales Prevention Department in many companies has reared its head. Instead of investing in the people who communicate with and serve the customer; companies are using this economic downturn as an opportunity to cut-back on customer service.

Instead of doing everything possible to thrill and retain their clients companies are outsourcing their customer service, using half the number of people they need in front-line, customer-centric jobs, and refusing to upgrade both support infrastructure and employee education.

And, when things go to hell and the customer is mad as a wet hornet, the company often uses the economy (or in the case of one company – the heat) as an excuse for the problems of their own making.

Here are a few of my recent personal experiences:

During all this time Groupon was fantastic. They were also embarrassed by Nature’s Prime’s communication and inaction. As the weeks turned into months, Nature’s Prime refused to communicate with me at all. NONE! They just ignored all requests. And, once again, that is what they did to many, many more customers.

Groupon finally gave up after they missed two more delivery dates and told me to file a dispute with my bank credit card. I sent that message to Nature’s Prime and suddenly got a call. The young lady was much harried and I could tell she was probably getting an earful from customers every minute of her day. She refunded my purchase.

Some companies will never learn they are not in control of their customers. Natures Prime Organic screwed over hundreds of people this year by not shipping their orders after immediately charging their cards. Most of this was part of a Groupon deal. Even Groupon could not get them to comply.

Yesterday the CFO posted on their Facebook Fan page “very pleased to announce the signing of lease for retail outlet/dist. Center in Melbourne Fla.” Fifteen people immediately responded with complaints.  I posted that they might want to consider investing in their people and customer service instead of brick and mortar for distribution. They responded by
removing my and some other posts. Then they took away the ability for people to leave them comments. The obviously believe customer communication is one-way and they are in charge.

I guess they never heard of Dell Hell. Here are some links I quickly found of people posting complaints.

By the way – they are the company using the heat as an excuse for not shipping. I’m sure the heat has been a problem in shipping at times this summer. But it wasn’t a factor all year. And, the heat wasn’t a reason for not returning calls, emails, and following through when they said they’d do something. And, when you have this many problems turning the conversation into what you think is one-way is a recipe for turning the internet into a megaphone blasting out your  actions.

Here is a little of our email dialogue:

Me:  I am shooting video in widescreen. I also have Control Panel, Project Settings, and New Movie format set for NTSC Widescreen. I have both tried checking and unchecking the “Detect format from first clip added to project. If we cannot detect the format we will use the format above.” However, when I drag a clip onto the timeline it will only put black borders on each side of the image filling up the widescreen. It will play widescreen movies fine that I previously made in Pinnacle using the same equipment with no problem. Your help is appreciated. Thank you.

Support’s Answer was – “I apologize for the inconvenience. Let me help you with that. That would be great also if you can provide me a screenshot of your problem for me to have a clear understanding of your case. Please give me a screenshot of the problem.”

“Screenshot!” I thought. “This is a video editing problem. How will a screenshot help?”

So I wrote back, “Instead of a screenshot which won’t actually show you what is happening, I created a video of the problem using GoView. All you have to do is go to this URL to see it. I look forward to a solution soon.

Their response – “I do appreciate the video you made. But I still need some information. Please do a right-click on the thumbnails of your videos then select ‘Display Information’ and please tell me what do you see the value of ‘Frame Aspect.’ You can actually toggle the project format and set it to NTSC widescreen or other, but for that to apply in a project, you need to change the settings first then create a new project to apply the changes made in the settings. “

The discerning reader will notice that the last sentence is exactly what I told them I was already doing in my first email.

This went in circles some more and then I asked to have my case escalated to the next level of support. They agreed and I then heard from another guy who I eventually decided sat in the same cubicle as my first support person. He asked me to send him a piece of the actual clip that is not processing correctly. I did a week ago on last Tuesday and he promised to get back to me by Thursday or Friday with a solution. I thought, “Why will it take 2-3 days more for them to respond. “ I was wrong. I’m writing this Monday afternoon and I still have not heard from them.

In the meantime, I started putting some tweets out about Avid’s customer service and looking for help. I also sent emails to two people I knew of from a couple of years ago but did not hear back from them. I did hear from a guy in their home office on Friday who follows their Twitter account and he promised to look into it and he had hoped to get back to me by COB on that day. I dropped him a note on Saturday morning and he said, “I’ll be in touch.”

Let’s stop here since the Avid story is ongoing. It’s Monday at 3:45PM EDT and I’ve yet to hear from the guys at the offshore site who promised to get back to me last Thursday or Friday. Nor have I heard from the guy at corporate who wanted a solution by last Friday but who now says he’ll be in touch. Maybe by tomorrow I’ll have an update.

Meanwhile, we all know what good and bad customer service feels like. With one you come away feeling like you just enjoyed a bite of an Amedei Chuao chocolate bar.

With the other, you feel like you just discovered you’ve run out of toilet paper and you’re in a public restroom. 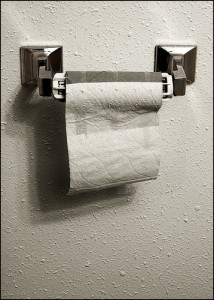 16 thoughts on “Your Call Is Important to Us – Unless We’ve Pissed You Off.”