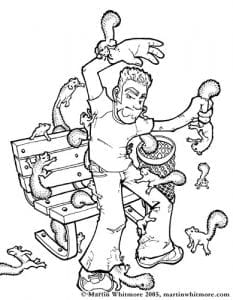 My friend Stephen is a little – well – different. He's had something like a dozen or more near death experiences starting when he was four-years-old. We met about nine years ago when I called his tree service and landscaping company. I picked him out of the phone book as I was new to the area and was in a hurry to find someone. Truth is I called three companies of which two showed up to give me a proposal. Stephen wasn't the cheapest but I had a feeling he would be the best. The rest is history. I became his client and later he became mine. Along the way we became good friends.

Since he's had so many near death experiences Stephen seems to have lost all fear of things like what might happen if you go swimming in a lake in a thunder storm. He's already been struck by lightning twice (not in the lake) but he actually does swim in his own lake during storms. He's invited me to join him as he says it is quite invigorating. Sadly, I always had a root canal scheduled during the same time as his invitations.

As you probably know, I enjoy playing with video. So, about once a month I visit Stephen at his absolutely beautiful 37 acre farm about 20 minutes away and I shoot some video of him for posting on YouTube. A few years back he decided to write a book about his past experiences. He now has two books out and he does quite a bit of speaking. He has a beautiful message once you strip out some of the fringe science. At least that's my opinion.

Last week he asked me if I could video him outdoors at dusk when it was pretty dark in order to use the dark woods behind as a metaphor for the darkness than can affect our lives. I said, "Why not give it a try."

I arrived about 7:30pm and set up a camera and tripod outdoors in front of some trees. While I was setting up Stephen started telling me about an idea he had to include a live baby squirrel in the video. He's been into wanting to use props lately.

Stephen's company removes hundreds of large dead trees a year. And, very often they find a nest of squirrels with babies in the tree. I doubt too many tree surgeons bring home baby squirrels who have to be fed every two hours 24×7 for weeks by hand but that's what my friends do. Or, I should say that is what Stephen's wife, Kathy does. It seems like she always has a house full of baby animals that need care and she takes them all in. And, right at this moment they have a litter that Kathy has been nursing along for weeks.

Stephen told me thought it would be a great idea to put the squirrel in the front pocket of his cargo shorts and then at the end of the video he'd reach in, pull out the squirrel and make some point about the mystery of life. He asked me what I thought about the idea. My first response was the title of this post. But, I know better than to try and dissuade him from anything he's set on doing. And, honestly, there was a bad little devil sitting on my shoulder saying, "Oh this is going to be too good to miss! Let him go"

Right after this discussion, Kathy showed up on her way out to a meeting. She stopped and asked me if I had been told about the live squirrel prop yet. We both were grinning madly at each other as we contemplated the possibilities of what could go wrong. Kathy said she had already warned Stephen that the squirrels were getting quite large and almost ready to be released and that they were not the tamest at this point. In fact, I think she said they were getting nasty. You'd think that would be enough to stop most people but not someone who has been struck by lightning twice.

Kathy waved goodbye and Stephen headed off to change into his cargo shorts and put the squirrel into his pants.

Meanwhile, I waited and talked to Stephen's youngest son. We discussed the squirrel idea and he was smiling from ear-to-ear. He definitely wanted to be there for the video. A few minutes after Stephen had gone into what he calls his shack to change, his oldest son pulled into the farm and saw me talking to his brother. After saying hello he asked if we knew where his dad was at the moment.

"He's in the shack putting a squirrel in the pocket of his cargo shorts." I said. He didn't even raise an eyebrow. Instead he headed for the shack. About 3 minutes later out same the oldest son and he was carrying a cage like you'd use to transport a cat to the vet. Or, a squirrel back to the house.

"What's up?" we asked. "Dad got bit by the squirrel – twice." came the reply. My first thought was I hope he's okay. But, my second thought was "I can't believe I missed videoing it." I know. Not nice. But, you would have thought the same thing.

Then his other son asked, "Where did he get bit?" The possibilities were frightening when you think about putting a squirrel in your pants.

Turns out the little critter nailed him twice on his hand as he was trying to insert him into his pants. When Stephen reappeared, he actually seemed saddened by the fact he wasn't able to get it in his pocket. I think I managed to stifle myself as he described what happened.

Now, I tell you this story for a couple of reasons.

One, I hope it puts a smile on your face.

And, two, Kathy called me today as she and Stephen were in the car. We talked about the squirrel adventure and she ended the conversation with a statement that is worth repeating and remembering.

She said, "I've always told my children you can learn things one of two ways. The first way is to learn from other people who know what they are doing.

The other way is the hard way – which is how your father likes to learn."

And, then we both giggled as I heard Stephen laughing in the background.